Treat your MindbodySoul to the Healing Drum Pulse!

Join Grammy nominated Frame Drum specialist Marla Leigh, on her Rocky Mnt Summer Tour – for an intimate evening as we explore one of the worlds most ancient and mystical instruments, the frame drum, through slide show presentation and concert/sound bath.WHAT IS A FRAME DRUM?The frame drum was first seen played by WOMEN in ancient cultures worldwide, as an instrument used for healing and ceremony.It is an AMAZING instrument that is now seen being used in popular, folk, kirtan and sacred music.EVENING FEATURES :
*Excerpts from Layne Redmond’s “When the Drummers Were Women”
Slide Show presentation.
* Community Music Making
*Shamanic Inspired Drum & Sound Bath featuring frame drums, flute and voice

Event is Sponsored by Davi Nikent

Marla Leigh Goldstein is a Grammy nominated Los Angeles based professional Percussionist, Flautist, Composer and Educator. She is one of the few women specialist in the frame drum,an ancient mystical instrument that was traditionally played by women.

Marla is an internationally recognized teacher and performer, who has presented throughout the USA, Australia, Canada and Europe. She also works with many world music, folk and kirtan artists. She carries the gift of being an inspiring and energetic educator, and soulful, charismatic performer. She has a signature series line of frame drums Cooperman Co. She is also CEO of Frame Drum Online Academy, an online resource for learning frame drumming. She also offers drumming and wellness retreats worldwide.

An avid lover of composing, Marla’s music has been featured in movies (Bold Native) and healing arts DVDs
Marla is currently working on composing music for her debut album to be released in 2017
Marla holds a BFA and MFA in Percussion from California Institute of the Arts 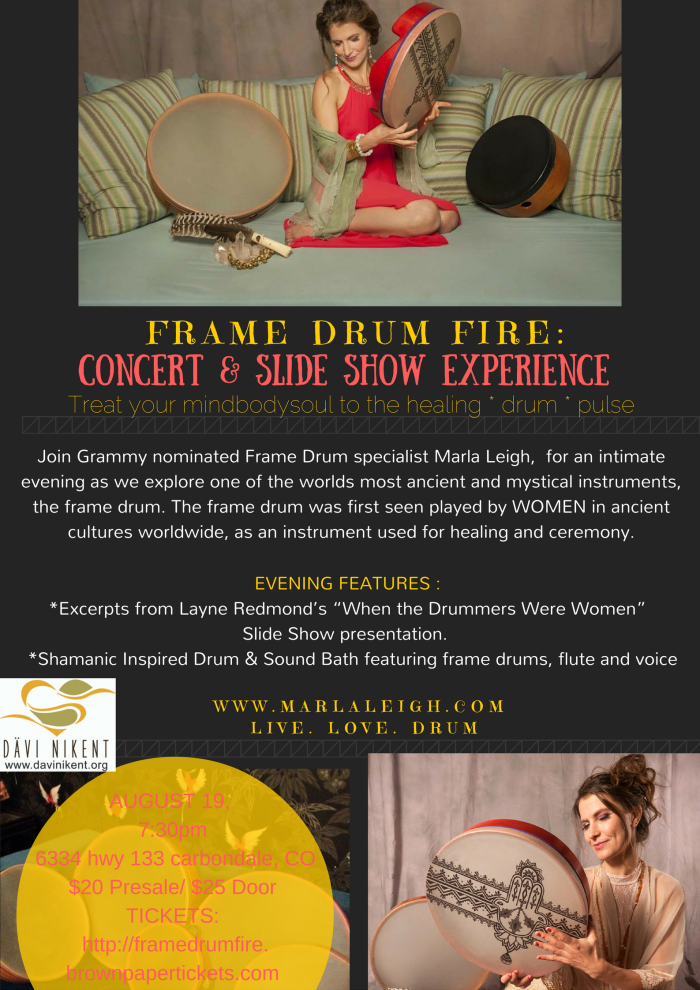